Autobiographical Comics in the Provinces of Argentina

Rodrigo: The crocodile?
Son: no
Rodrigo: The ball?
Son: no!
Father: Salvi, something has to go. 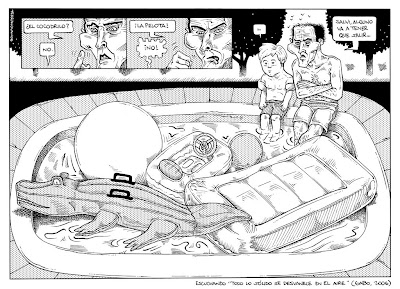 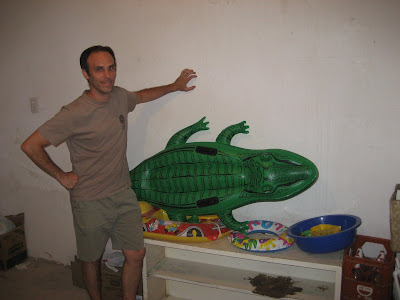 When I arrived at the house, I was first struck by the fact that Rodrigo Terranova isn´t as ugly as he draws himself to be. I got a taste of the world behind the autobiography. Rodrigo´s son was wearing a Spider-man mask and I came along for the ride to drive him to a friends house. Rodrigo met Buenos Aires comics creator Cristian Mallea after winning a national contest and Cristian suggested I contact him. Along with Cristian´s collegue Angel Mosquito and several other artists, Rodrigo contributes weekly to a Historias Reales, a blog of autobiographical comics. These guys are like Argentine James Kochalkas.

Rodrigo´s father moved from Buenos Aires to the city of San Luis (the capital of the province in which I spent the last month) to pursue a job in industry. The national government had channeled some funds there in order to more evenly spread economic activity through a nation. Like his father (and mine), Rodrigo works in a factory today and he often thinks of Harvey Pekar´s comics about mundane aspects of everyday life to get him through the day.
Rodrigo tried teaching workshops on comics, but didn´t find it terribley fullfilling. He said he could, however, see himself doing it with a smaller, more committed group of students. In terms of grander visions of pushing forward the natonal artform, Rodrigo sees his role as making the best comics he can. Between work, a wife and children, he hardly has time to do that.
While being in San Luis sometimes makes him feel out of the loop, he likes the slower, more managable pace of life and connection to his wife´s family who is from the region.
Rodrigo reads English and you could contact him at supermancos@yahoo.com.ar
Posted by Ari Pliskin 3 comments: Links to this post