My mom greets a cousin she hasn't seen since her last time in Argentina, before I was born. 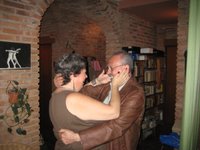 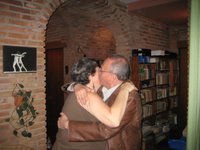 On Saturday, we had a big family reunion at my grandmother’s sister's house. It was great to see my mom and family smile as much as they did. The evening climaxed with everyone singing Argentine songs, including "Luna Tucumana" by folk legend Mercedes Sosa. My mom knew the words to the songs. She really felt at home. I, remember hearing the song at the Mercedes Sosa concert (the last concert performed at Teatro Colón, where my grandparents used to go on dates, before it closes for a few years for renovations). I of course, didn’t know the words.

Later that night, I ran into some Pennsylvanians at a bar and did a little Cleveland-Pittsburg football rivalry thing. It was nice getting to act out a script with people I don’t know. Granted, I could care less about football, but it was nice for a moment.

At volunteer English teaching, a couple of French women and I taught a few lessons on numbers in English in a Comedor (soupt kitchen/community center type thing) in Zona Sur of Gran Buenos Aires. The kids were kind of silly, generally sweet and wanted to learn something. We had fun. It felt good to be teaching again. A few were syblings and they hit each other when they got frustrated. I may not have the imperative tense down, but the "teacher look" transcends all languages.
Posted by Ari Pliskin 2 comments: Links to this post

So my mom arrived in on Wednesday. She hasn’t been here since before I was born. We visited the house that she lived in until she left at 16 in 1966. While anticipating her trip, my mom dreamt at night about entering her house, but didn’t expect to do so because her sister didn’t have luck with the residents who lived there a few years ago. Adina rang the bell anyway. Luckily, the house was being worked on. A painter let us come in and look around. I saw the bedroom my mom shared with her sister, the rooms where they lived (confined to one floor), the backyard etc. My mom told me that her father (who was and is a doctor) decided to leave in order to pursue greater economic opportunity. I haven’t been in the houses they lived in when they first got to the , but the house my grandfather currently lives in is certainly much bigger than this one. We were all very, very happy to have this opportunity.
Posted by Ari Pliskin No comments: Links to this post

I couldn’t help but rent “24 hour Party People” (which isn't actually a documentary, but historical fiction), as any semi-responsible student of the social sciences must understand the historical context of his or her cultural experiences. While I was being born in 1982, New Order record sales funded the legendary Haçienda nightclub in as the Argentine military junta tried unsuccessfully to wrest the Islas Malvinas from British control. As I saw many Malvinas-era Argentines doing in the documentary “Republica Perdida”, fans chanted “” before the New Order concert on Saturday. By the end of the show, they were chanting “New Order”. 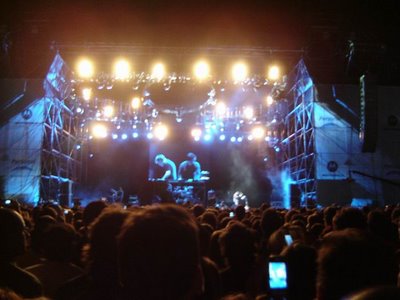 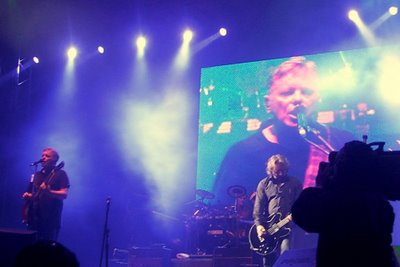 Last Saturday, I went to Personalfest, a very popular annual music festival here in . I started at the main stage with Ian Brown of the Stone Roses and then strolled to the second stage for NYC's the Bravery. There is nothing like a tight pristine suit, wry pretentious lyrics (“Your words are like knifes in my ear”) and inflated egos to remind me of home (one of them, at least). My sister and I passed empathetic glances while a band member tried to thank the audience in Spanish.

As we returned to the main stage for New Order while the Bravery was still playing, my sister said “I hope they play that song about that about that soldier who wants to see his family." She got her wish. Lead singer Bernard Sumner (who turned 50 this year and dressed humbly for a rock star) announced that “Love Vigilantes” is a “vehimently anti-war song”.

Near the end of the show, a band member declared “Ian Curtis lives” before playing “Atmosphere” by Joy Division during the encore (after Joy Division lead singer Ian Curtis hanged himself, the remaining members formed New Order). I don’t know if it is just me, but “Love Vigilantes” always reminded me of “Atmosphere”. Sumner didn’t try to speak Spanish and he rightly assumed that Argentine fans would eagerly and aptly accept his invitation to sing along to the main verse of “Love Will Tear Us Apart”. Perhaps my expectations for New Orders synth super hits were too high, perhaps those songs depend too much on production or perhaps darkness is just beautiful; for me, the Joy Division songs stole the show.
Posted by Ari Pliskin 1 comment: Links to this post